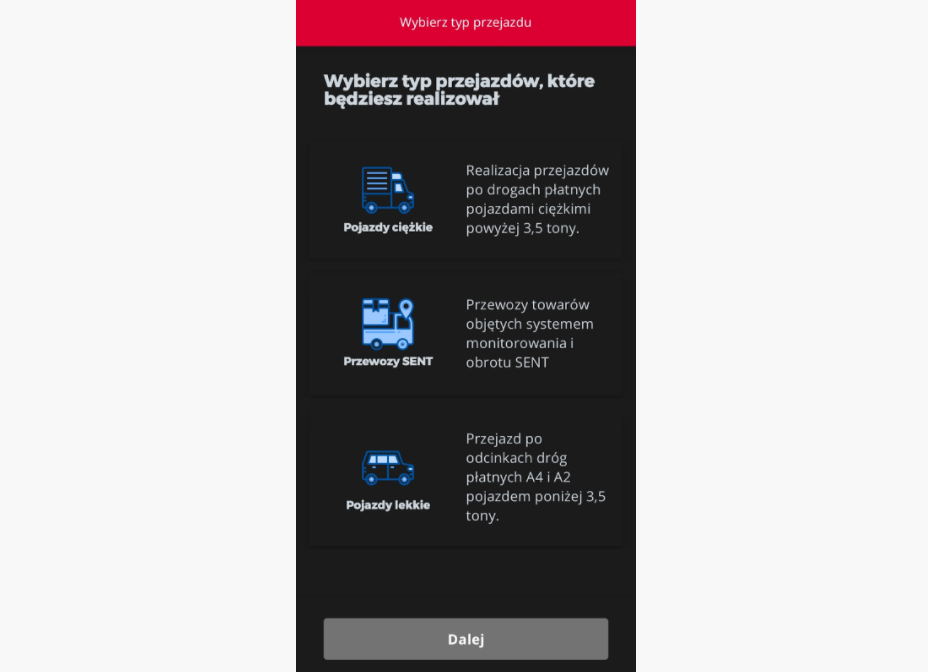 What is e-TOLL – highway toll application!

– Application used to pay tolls. – reads the description of the application in Google Play. Although the network is heard voices of dissatisfaction, but to the contrary, in fact this description does not lie. E-TOLL is really for paying tolls while not meeting any standards, but one step at a time…

What is e-TOLL PL?

It's the name for a new app created at the behest of state authorities that will eventually ease traffic on toll highway sections. Currently this applies to sections on the Konin-Stryków and Wrocław-Sośnica lines. The introduction of this solution as early as December will replace the existing tolls at gates, which in theory will lead to the absence of traffic jams on the route.

Is the e-TOLL application obligatory?

The installation of the application turns out to be an obligation for all drivers of cars and trucks wishing to use the A2 and A4 freeways, because failure to pay the toll will be associated with prosecution by the relevant state authorities, and incorrect payments will be a prompt for the tax authorities.

There is also a possibility to buy a traffic ticket offline, i.e. in points of sale of such tickets. Unfortunately, they are not known because no such list has been made public, which seems curious given the fact that there are less than two weeks left until the first day of December.

So we can treat the application in question as the only source of not getting into trouble, although the writer of these words says it with a big wink.

Points of sale at Orlen stations?

The motofakty service provides some tips.pl, who cited assurances from the Ministry of Finance that freeway tickets will be available for purchase at selected petrol stations. For obvious reasons, the presumed station network seems to be the Orlen brand.

How does e-TOLL PL work??

The operation of the application was explained in the simplest terms by an expert from Auto World:

– The system is based on GPS location – so, instead of cameras reading license plates of vehicles entering toll road sections, each vehicle has a locator that reports to the system the route driven and on this basis the system charges the driver's account. In the case of a passenger car driver, the function of the locator is fulfilled by a smartphone running the application, which means that you do not need to have any additional devices in the car, but you do need to sign up for the system and also enter your cars into it. Unfortunately you can't attach your credit card to the application – you have to credit your account with at least 20 PLN when configuring the application and this way you can credit the system manager. – writes Maciej Brzezinski. (auto-swiat.pl)

How to set up e-TOLL?

First of all, to run the application you need to download it. This is possible on both iPhone and Android OS phones.

After installing the tool, we get a message about being careful on the road and obeying traffic rules. The developers also inform us about the dangers of using the phone while driving, which sounds absurd when we realize one thing – e-TOLL makes us do it! According to users' reports, the application is a nightmare to use and distracts drivers every now and then.

Fortunately, there are several ways to react to the problem with the state-owned app. After completing the journey there is an option of completing it, but you need to know the exact place where the application stops working. You can also purchase an e-ticket up to 3 days after the journey or exit the toll road in the event of a breakdown. The government graciously gives drivers a full quarter of an hour for this procedure.

Moving on to further steps to activate this benefit, we must determine what type of vehicle we are moving. Next, we are inundated with information on the advantages of using e-TOLL, although to our misfortune there is not much of it. 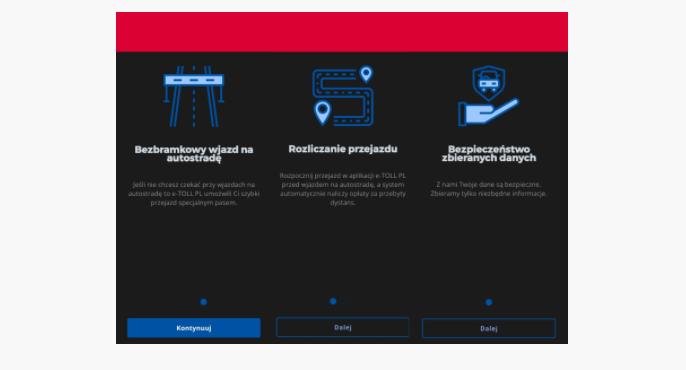 The next step is to read and accept the regulations, after which the application's business ID will be assigned. 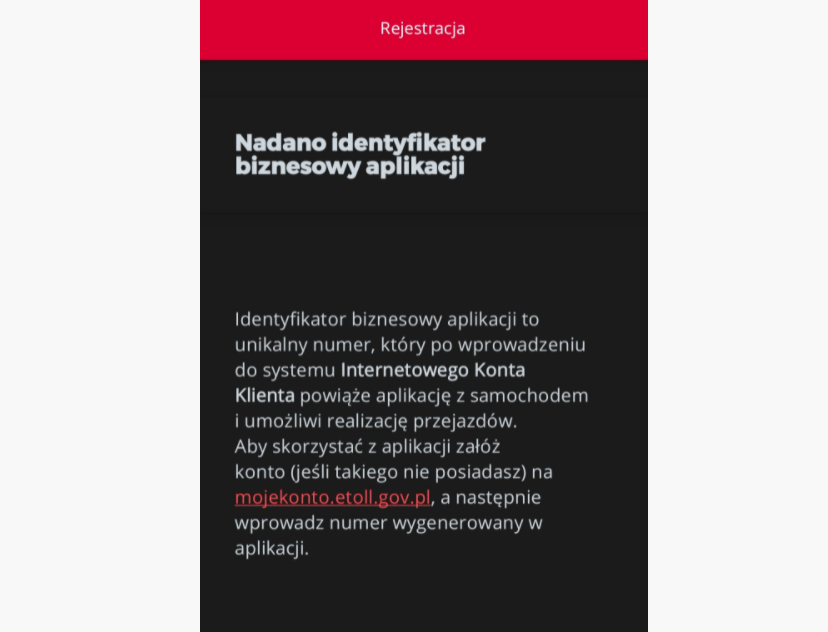 You need to follow the instructions, and sometimes go back in the settings, because the whole process is not intuitive and pleasant. Maciej Brzezinski commented that – It is possible, and even necessary (to strictly follow instructions), to switch between the e-Toll application and mObywatel. The operation is quite bizarre in its complication – marks.

Later, you have to go back to the e-Toll application, click on the link again, enter your details and the car, with the system selectively choosing whether the driver is to enter the registration number alone or the entire specification of the car. Then you have to pay at least 20 PLN which is also not easy, and then you have to paste the code from the app on our account page to link our phone to it.

Even with the cemetery applications I have not encountered such bitterness as can be seen in the comments on Google Play. No wonder, after all the forced registration of a moderately working system can give a real migraine to the already troubled society.

– I lost personal data, a large part of my psychological well-being and money, which went into the ether thanks to this bubble. I wonder if the person or persons who allowed this application to be used will suffer the consequences, because they should. The number of errors is appalling, registration is an ordeal. Shame on the world.– we read in an entry dated 19 November 2021.

– First run, it works. There are several disadvantages. The application does not work in the background, and this should be the basis. Visual control of the application is essential, you have to keep an eye on whether everything is working (battery status, GPS, data transfer), which takes your eyes off the road. Running the app while driving risks an accident, consumes too much attention. No night mode, which makes the phone in the darkness a flashlight that shines on the eyes. I am upgrading from one star to two. – we read in a comment from November 21 of this year.

– Nothing worse has ever happened to me than this app, but what can you expect from a government app (see ZUS). Get to work to simplify this app as every citizen is expected to use it from December. You got carried away with your imagination while creating this application, too much unnecessary information. – one of e-TOLL users complains.

– In the package with the application should be a large dose of sedatives. Going through the registration and activation process should be equivalent to getting at least a PhD at one of the leading technical universities (e.g. KUL). In addition, the application distracts from the route and forces the use of the phone while driving. Morons invented it. – another critic bluntly countered.

Also news outlets are not in favor of the app, trans.info agrees with users enumerating the drawbacks of this implementation, which include: incorrect payment drafts, delays in actions, suspensions, logins, requiring access to read the battery life and not optimizing the process of saving it, non-intuitive operation in the background, overheating of the battery and spontaneous shutdown of the application when the parameters are incompatible.

Motofakty.pl also remind us that over 10 years ago there was an attempt to introduce the viaTOLL system, which resulted in a huge regression of companies involved in the initiative and problems for drivers. Today it is similar.

– Implementing the e-TOLL system in OBU and ZSL devices was not an easy task, due to the necessity to reprogram and adjust to the guidelines imposed by the Ministry of Finance. Unfortunately, companies offering OBU and ZSL devices are still struggling with e-TOLL issues. Some entities did not manage to implement the changes on time and, consequently, they are currently experiencing a financial crisis. Many companies using data devices from suppliers who failed to implement the e-TOLL system had to suspend operations and wait for the green light from equipment suppliers, comments Jakub Wesołowski of Flotis

Fortunately cashless.pl assures that drivers will be saved from e-TOLL by Autopay and Spark, and soon Janosik, integrating with it. They do not ensure the passage of entire stretches of highway, but they certainly save the peace of mind of many a highway user.

– Importantly, Autopay can also be used by drivers from other countries and drivers driving vehicles with foreign registration numbers. – Autopay service.

Do we need all this registration ceremony?

The puzzling fact is that e-TOLL is obligatory application for drivers who drive on A2 and A4 freeway sections. Very intriguing here is the way of forcing to create an account through mCitizen or Trusted Profile. e-TOLL itself sometimes requires clients to enter their PESEL and other sensitive data.

Of course the government has access to all this information, but isn't it an attempt to profile us by offering us some kind of applications at every step. In addition, this time it is mandatory and forces the implementation of other solutions. The question then becomes why do app owners need so much information when AutoPay, for example, is able to do without this procedure.

What is worse, according to moto.pl, this process will be controlled by the National Tax Administration equipped with Fords with LIDAR laser sensors identifying license plates., whose effectiveness is calculated at almost 100 percent. even in poor visibility and adverse conditions.

Despite the message about data security, we should be aware of the poor security of Polish IT systems, especially those related to the political sector, as evidenced by hacking attacks on the accounts of our dignitaries. Data leakage from this as well as any other government application can be very significant in its consequences, especially since the most sensitive data units are stored in them.

Poles, beware of loving the gates on the freeways, they are going away so quickly.

In all seriousness, the editors of Mobile Trends look to the future with great hope, hoping that the tool in question will be further developed. No revolution is complete without casualties and although these will be the nerves of Polish drivers, perhaps the problem of traffic jams on freeways will finally disappear… although with e-TOLL this future seems remote.