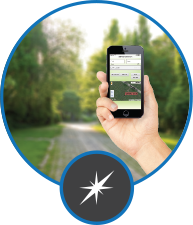 How not to find a grave in the cemetery – grave navigation in the application?

Today is a day of reflection, also solemnly known as All Saints Day. Where this tradition comes from, what it entails, and what mobile app developers have to say about it, you’ll read briefly below!

All Saints’ Day in Poland is a Catholic tradition, the origins of which can be traced back to the Acts of.pl designated for 9th century. The holiday was designated for November 1 by Pope Gregory IV in 837. For the Church, it is a day to celebrate the memories of those officially recognized as saints, i.e. beatified and canonized, but also of all the faithful departed. On this day, people gather in the areas of cemeteries to light a candle to the past, silently remembering his life. A cemetery is a place of prayer and crying, but also laughter of people remembering their loved ones can be heard from everywhere. The holiday is practiced even by non-believers as it is an opportunity to show remembrance to their deceased loved ones, making the day a special tradition for all.

Henry, look at the traffic jam!

And precisely, because the holiday is celebrated by all compatriots, and the day is officially a holiday, it generates a lot of problems. First, people from all over Poland collect money for cemeteries scattered around the country. This causes huge traffic jams, delaying traffic for at least several more hours than usual. We should also mention the autumn plough, which is not a pleasant weather for driving on the road. Insurance comparison site Mubi shared its data that in 2020, on this day alone, there were 173 accidents in the country that led to 23 deaths and injured 181 road users. What is equally disturbing – 674 drivers drove without being sober. In addition to weather conditions, traffic jams, crowds at cemeteries, possible theft of property, and one more drawback. Probably each of us once happened to look for rarely visited burials of relatives. Some people can even spend several hours on this task, resignedly leafing through the names on the tombstones.

Maryś, you better at this time remember where the grave is!

Polish necropolises unfortunately resemble labyrinths in which Theseus himself would have a problem even with a thread from his beloved. Although no application has yet been found for the weather (although we can already predict it), and our attentiveness on the road, let alone our sobriety, can only be influenced by ourselves, mobile application developers, like Ariadne, have created our own thread. Antyradio made a list of such applications some time ago, updating it from time to time. Today we’re going to lean on it slightly, but only slightly, we’re about to find out why.

The list begins with three applications. The first is the app described on 19.11.2013 named Ipowązki,which was a map and a guide to this special Warsaw monument of memory and. The second app is Polskie Cmentarze described on February 2, 2014, which was supposed to be a great locator for every buried person. The third of the first is Sacred Poznań with 31.10.2014 r., to have a listing of all churches, service times, cemetery lists and grave maps. There is one problem, because Ipowązki no longer exists. We can guess the reason for this by going to the comments under the Sacred Cognition in AppStor, of which there are three, which you will see below, as confirmed by the later application Polish Cemeteries.

The app has earned less than two stars, and there are literally few positive reviews. Comments like: “Chad” i “Super I like it” along with the entry “Everything works as it should. There is even a map on how to get to the grave” are the only positive entries under this heading and seem to be the work of the so-called. trolls. The rest of the commenters are strongly dissatisfied with the service. It is worth taking into account that most of the users may represent elderly people who may not fully understand the operation of each functionality, but this is not an excuse for a service whose UX should anticipate this already during its design.

Grobonet reportedly has more than a dozen versions, each targeting residents of specific localities. In the Google Play store we can find only two cities for using the application, i.e. Grobonet Rzeszów and Grobonet Końskie. We won’t find a single one in the App Store, although I don’t think there’s anything to be sorry for, looking at their performance

Most users warn that the application does not turn on properly at all and only shows a message about insufficient parameters.

And here the first surprise, my kind sir – the applications have a positive response. Admittedly, Koszalin received only 9 ratings in this field, but these gave it 4 stars, which is the second best app in this list, if you can call it that. Especially looking at its selective operation. Szczecińskie Cmentarze already has 135 ratings and 3.4 stars, which, when comparing it to its twin, puts it slightly higher than all of its predecessors.

The authors of both boast that they have managed to compile data on funerals starting from 1945, so it should lead to people buried since then. The applications have had updates quite recently, because this year, so the developers have not forgotten about them. In addition to locating graves, Szczecin Cemeteries allow you to learn about other necropolises and their descriptions.

Fortunately or unfortunately. These applications are not available in the store from Apple.

The Olsztyn app is the best rated in terms of quality of reviews from the others. It has the highest percentage of positive feedback in comments, but calculates very infrequent updates on its board. Olsztyn Cemeteries allows you to locate graves in cemeteries in Olsztyn on ul. Wadyska and ul. Crosswise. The program is navigation to the grave, but also to the cemetery itself on the way to it.

The application is available only in Google Play store.

The last of the anti-radio list. It also has a completely different operation from the others. It does not collect databases and does not locate places based on them, but allows people who use it to save the place where they are, In this way, once you find a burial, you can return to it using the saved GPS location.

The app has received 59 ratings in the google store and has an average rating of 3.0. Most negative reviews come from a lack of knowledge of how it works or the lack of updates themselves, for which the developer personally apologizes in the comments. The application, although causing problems, seems to work. There is its twin in the App Store, but for full functionality you need to buy a paid version.

Looking for the Grave

The application, which we found, and which is no longer on the anti-radio list.

“Looking for a grave.pl is a tool created for administrators of Polish cemeteries and people who want to find and visit the graves of their loved ones. Our application allows you to find the data of a grave and determine its exact location, which is a great convenience not only for the cemetery administrator, but also for relatives visiting the deceased. Simple, intuitive system and modern, pleasant to the eye look are the features that distinguish our product” – we read in the description from the developer, both in Google Play and App Store, which is also new compared to other applications.

Moving on to the reviews themselves, on the App Store it has four stars out of four reviews expressed, with one comment expressing clear dissatisfaction, and on Google Play it collected 23 ratings, which accumulated to 2.6 stars. Opinions are strongly divided on this issue, but such a small number of them suggests the unpopularity of this solution among those who use the service.

Is it worth installing apps that navigate cemeteries?

The answer should not be so unequivocal, but it should be clearly stated – in our opinion not! Even objectively speaking – these apps just don’t work as expected and it’s no wonder that they are removed from app stores every now and then. Stop talking and be ashamed! – Kmicic would say at the sight of such conveniences. Besides, it is worthwhile to practice memory and not to include technology in every sphere of life, especially the sacred. It’s not about religion, it’s about values. It’s worth nurturing the spiritual element in yourself and giving yourself at least a day’s respite from the digital hustle and bustle.

Technology helps us, but it also makes us lazy and clumsy in more and more mundane situations, which should be taken into account when installing any new application. As for the creations listed above, their users do not leave a dry thread on them, despite the fact that they were supposed to be such threads. Of course, there may be a lucky person who will not be affected by these, but Mobile Trends editors mostly strongly discourage them!